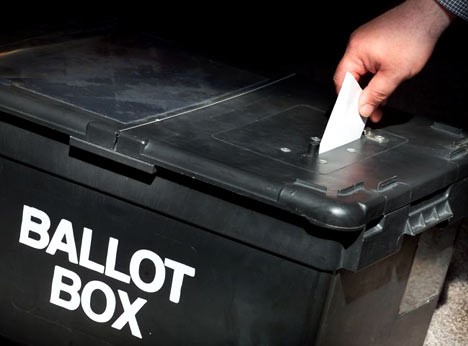 When Britain voted leave last year, I didn’t realize the country was voting to take leave of its senses.

The #GE2017 election campaign has been a travesty of democracy. An election called for the sake of a Brexit mandate that has seen virtually no discussion of what Brexit really means. A prime minister who avoids facing unscripted questions from the media or the public. A media so obsessed with its own echo-chamber narrative that it has failed to expose gaping flaws in both leading parties’ campaign pledges. All conducted according to outdated election spending rules that the wealthiest party has exploited (once again) to give itself an unequal advantage.

Instead of facing up to and healing the divisions and discontent exposed in last year’s referendum vote, mainstream politicians and media have doubled down on meaningless soundbites as the solution to our country’s woes.

Sleepwalking into the future

As a result of this collective failure, we seem destined to sleepwalk into a future where a mean-spirited, incompetent government will just make matters worse. Conservatives will starve the next generation of the educational opportunities the country needs to succeed in a fast-changing world. They will continue to obstruct the construction of housing that young people can afford to live in, while refusing to increase investment in our health service.

The Conservative government will impose authoritarian legislation in the name of freedom from terrorism, and undermine our online security to mask their failure to invest in frontline policing. They will starve innovative industries of investment and obstruct access to global markets. On top of all of this, they plan to skew the electoral system even more in their favour.

There is an alternative

There is an alternative future within our grasp. Whereas Theresa May stands for all the things that make Britain petty, Liberal Democrats stand for British values that everyone aspires to all over the world — most notably tolerance, fair play and justice.

We want a society that pays public sector workers a decent wage but also supports the efforts of entrepreneurs to build new businesses. We want children from poorer homes to have the same educational opportunities as those from more privileged backgrounds. We want regions and communities to have funds they can invest to suit local needs, rather than being dictated from Whitehall. That includes sensible investment in housing, schools and the health service. We want everyone to be equal citizens, no matter what their ethnicity, sexual orientation, religious beliefs or educational background. And we want a democracy that accurately reflects the will of the people.

On Thursday June 8th, voting Liberal Democrat in constituencies where they are the main challengers to the Conservatives will act as a brake on Theresa May’s dystopian vision for Britain and help put more people in Parliament who can argue for these long-held values of fairness, freedom and openness.