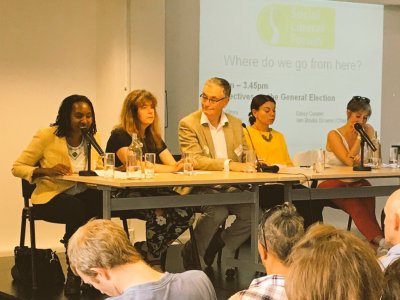 In most respects, the result of the general election was not a good one for the Liberal Democrats. Going up from 8 to 12 MPs is some consolation, especially when it brings back experienced and talented former ministers — the party’s front bench can now boast more ex-Cabinet ministers than Labour. But in most seats across the country, the party fell back. It was not the progress that had been hoped for at the outset.

Quite a few of the sessions therefore at the Social Liberal Forum conference last Saturday looked for lessons from the campaign and what we can do to perform far better next time. Here are a few brief takeaways from those sessions (I already published some thoughts on the policy sessions I attended). Overall, I think we have to be wary of ‘fighting the last war’ and be alert for new trends that are rising in importance.

Academic and former Cambridge MP David Howarth delivered an information-rich presentation looking at how the Liberal Democrats are perceived. In one chart he mapped LibDem appearances on BBC Question Time, which showed Liberal Democrats were invited less during the coalition years and then our participation fell off dramatically after the 2015 election, while UKIP soared. He blamed this exclusion from BBC current affairs coverage for a large section of the electorate being indifferent or ignorant of what we stand for.

But while he was right to point out that voters still get most of their politics from television, on an earlier panel LibDem newbies champion Daisy Benson pointed out the growing reach of social media. While only 100,000 attended Jeremy Corbyn’s rallies around the country, social media and shared video of these events reached 2 million. We need to focus on making the most of this new route to reach voters that a) can bypass the 2-party bias of conventional media, and b) is especially potent among younger voters.

In the light of the ongoing Channel 4 News investigation into Conservative expense declarations at the 2015 general election, there was a fringe session on election spending fraud and how to spot it. I suspect all parties are ultra-careful now to properly report their battlebus spending, but other areas we should monitor very carefully in the future are data science and social media spending.

A good point made by one of the attendees is that this country got its easy-to-manipulate political spending laws as part and parcel of the dodgy two-party stitch-up enshrined in its electoral system. We should sweep it all away with a properly representative system. But first we have to win power within the existing system — while explaining why it’s so dodgy.

No deals with established parties

At one point in David Howarth’s presentation he spoke about the need to rebuild broken trust in the LibDems. He said we can’t do that by ourselves. Instead, other people outside the party have to show that they’ve forgiven us and they feel we can be trusted again. This much rang true, but then I felt he ruined it all by saying this needs to come from people in other political parties.

First and foremost we have to reach out to people outside of politics, especially those who feel let down and unrepresented by today’s politicians. While it’s also important to reach out to others within politics, their endorsement won’t cut much ice with the general public. As for alliances with members of the current Conservative and Labour parties, unless it’s cross-party working on specific points of policy agreement, I think we should steer well clear. If MPs resign the whip and effectively become independent, that’s different. But as long as they’re signed up to policies we fundamentally disagree with, no deals or pacts please.

A superb panel of leading party strategists gave their perspectives on the general election, and incidentally demonstrated the progress the party is starting to make on breaking out of its white/pale/male/middle-class conformity. But I find party gatherings are still not welcoming enough to those who don’t conform to middle-class professional behaviours and expectations. And this is my perception as a white, male, middle-aged, middle-class, professional family man. Goodness knows what it must be like if you’re not someone who looks and feels the part.

This is my one big worry about the core vote strategy championed by David Howarth and Mark Pack. If you only appeal to your existing supporters, don’t you build in your existing bias? If the Liberal Democrats are to prosper as a party, we must go out of our way to open up to people from non-middle-class backgrounds.

My final takeaway is an optimistic one. There are still real grounds for believing the party can break through all of these obstacles. Coming out of the station on the way to the event, I got chatting to Jonathan Brown, chair of Chichester LDs, who is one of the more than 50% of members who have joined the party since the 2015 general election. Three-quarters of his local party executive are people who became members in the past two years.

Although a lot of the existing structures date from another era, the party’s membership is dominated by people who have come to it fresh. This reinvigorated party of more than 100,000 is a blank sheet that’s eager to write its own playbook. It’s going to be a challenge to harness all that energy in the same direction, but the potential is there, waiting to be unleashed.